Winning the keys to City Hall

Will the southern suburbs give Zac the mayoralty?

If any aspect of London psephology has received any coverage it?s the Boris Johnson ?doughnut? ? a belt of Tory blue around the Labour red heart of the capital.There is a certain truth to this. The Home Counties don?t start at the Greater London border. Bromley, south Croydon, Northwood and Pinner are all salubrious suburbs that share more in common with the wider commuter belt than bustling central London. They are the well-off white middle class homeowners with a garden and two cars. Not exactly stereotypical Londoners but they have a vote just as much as the hipsters in Hoxton or the council flat dwellers in Hackney.But this analysis is limited. This map of the vote share lead in each ward back in 2012 does demonstrate that there is something of a ring of Tory voters around the edge of London, but also that the picture is more complicated. 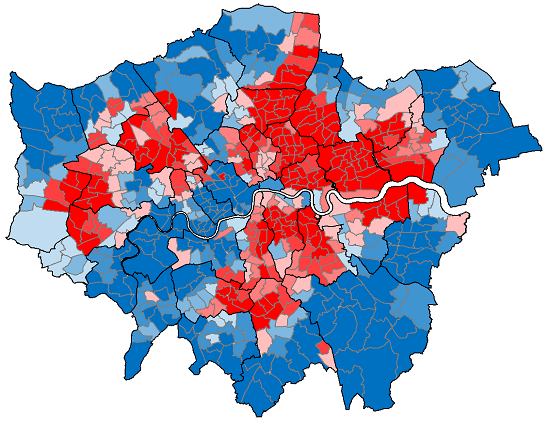 Outer London ? think Edmonton just as much as Orpington ? includes an interesting mixture of areas, and the demographics of London constantly change. Harrow and Ilford are outer London suburbs where the ethnic minority population has grown rapidly, impacting on Tory hopes in these suburbs. Some outer London neighbourhoods are well known as urban working class hotspots anyway: Southall, Tottenham, Newham.Similarly, Inner London is a mixture of Labour and Conservative voters, predominantly divided on an east-west Axis.Fundamentally, London is split by class, homeownership and ethnicity, not whether you live in Zone 1 or Zone 4. There is only one coherent part of London that ticks the boxes as middle class homeowning and white, and that is Outer South London. From Twickenham in a semi-circular ring round to Bexley is a solid block of Conservative voters. And the results from 2012 demonstrate this:

Extraordinary, Ken Livingstone actually had a small lead throughout most of London in 2012.It was the seven very atypical boroughs in Outer South London, boasting only a handful of tube stops between them, which handed Boris Johnson victory. Their vote in favour of the Conservative candidate by a margin of two-to-one overrode the cosmopolitan mixture of the rest of London.Having said this, his success in the southern suburbs was a necessary rather than sufficient condition for victory. This chunk of London gave him the edge only because Boris was competitive in the rest of London, cutting Ken?s lead to single digits elsewhere. It has too small a number of voters to reverse a clear verdict from the rest of London in favour of a Labour candidate.Now we understand this a little better we can be more pointed in our questions.Can Zac be as competitive as Boris throughout the rest of London to allow his inbuilt Conservative majority in the southern suburbs to take him over the top or will Sadiq reclaim many of the usual Labour voters that voted for Boris?Data from the GLA’s London Datastore.