What will tactical voting do to the election?

What will tactical voting do to the election? 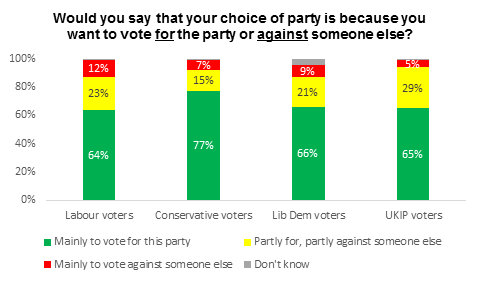 Although they lead in the polls Labour voters are more likely than Conservatives to be supporting their party mainly as a vote against the other side. This means that a potentially larger proportion of Labour?s supporters are willing to vote for somebody else if it means that they will keep the Tories out.

Leaving Scotland aside for a moment, the two key groups in England and Wales in determining whether David Cameron or Ed Miliband will be prime minister after the election are UKIP voters who lean Conservative and Labour voters in Lib Dem-Tory marginal seats who have voted tactically in the past to keep the Conservatives out.

So let?s take a look at some more specific scenarios. For each group of voters, we asked them to imagine they lived in a constituency where their chosen party had no chance of winning and told them which parties were most likely to win.

For example, Labour voters were told to imagine they lived in a Tory-Lib Dem marginal and, while 51% still would vote Labour, the rest broke decisively for the Lib Dems by 22% to 4%.

UKIP voters were told they lived in a Conservative-Labour seat. Again, just over half (55%) would stick with UKIP but the rest split narrowly in favour of the Conservatives (18%) over Labour (11%). However, if we look at specific age groups within this sample, the only reason the Conservatives are ahead is because of older voters. UKIP voters under 55 are evenly split between Conservative and Labour.

As well as this, only a third (32%) of those who voted Conservative in 2010 and would now vote UKIP say they would switch back to keep Labour out while nearly half (47%) would stick with their new party.

On the basis of this survey therefore it looks like the Lib Dems can rely on Labour voters a bit more than the Conservatives can rely on winning UKIP voters back to the fold by presenting the election as a two-horse race.