What we saw from last month has remained more or less unchanged, with Theresa May retaining her net rating†of +17%* and Jeremy Corybn on a low -36%*.

Labour voters†have lost faith in the Labour leader over the past two months. Currently†just under half (48%) of†those intending to vote Labour approve of the way Jeremy Corbyn is doing his job, with one in four (26%) disapproving. This gives him a net approval rating of only +22% amongst his own voters, and down from an already low +33% in January.† 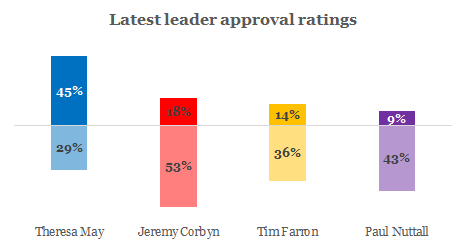