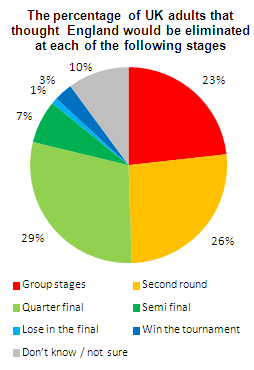 A quarter (23%) of those who watched England?s World Cup games correctly predicted that the Three Lions would be eliminated in the group stages whilst 29% expected disqualification in the quarter final and a disappointed 4% expected England to feature in last Sunday?s final.

Gamblers were also left regretting their faith in the national side with 63% of them betting on England to win at least one of their matches throughout the tournament. With an average of £33 per person being gambled over the duration of the World Cup, England?s failure to win a single game hurt some in more ways than others.

Events in Brazil have not only had a negative impact on England fans, but also their employers as many across the UK felt the adverse effects of late night kick offs over the last four weeks. 10% of fans planned to take time off work the day after a late kick off and 15% were foreseeing a hangover. London was the region hit hardest with 30% claiming they would pull a sickie after a late night match.

Opinium Research carried out an online survey of 2,003 UK adults aged 18+ from 10th to 12th June 2014. Results have been weighted to nationally representative criteria.