A third (32%) of likely voters said they trust Mr Cameron and Mr Osborne to handle the economy, while Ed Miliband and Ed Balls lagged behind on only 21%. The PM and Chancellor?s ratings are up 4 points from the 28% they received June when we last asked about economic trust. 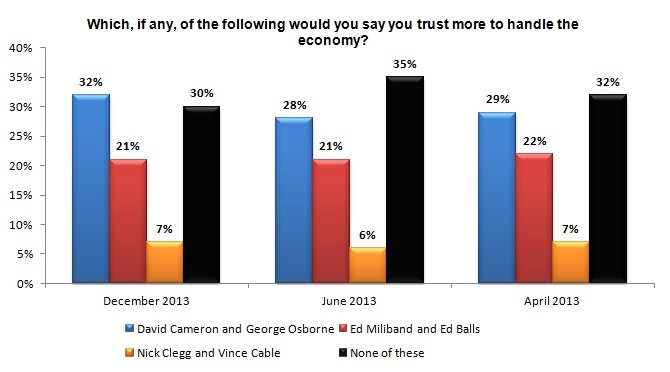 The good figures for the Tory front bench can perhaps be best seen as due to strong support from their own voters. Almost nine in ten (88%) of Conservative voters trust Cameron and Osborne with the economy, whereas only six in ten (59%) of Labour voters trust Labour?s economic team.

The figures are even worse for Nick Clegg and Vince Cable, who are trusted to handle the economy by only 7% of the likely voting population. They are also trusted by less than half of their own voters (46%).

Another source of relative economic trust in Cameron and Osborne is surprisingly amongst UKIP supporters. Although only a quarter (25%) of likely UKIP voters trust the Tory front bench to handle the economy, this is high compared to the almost non-existent ratings for Labour?s (3%) or the Lib Dems? (1%) economic team.

Finally, the number that declared no trust in any of the three main economic teams has dropped from 35% to 30%, which also means that the ?none of the above? option is no longer the plurality amongst voters? attitudes to the economy.

Opinium Research carried out an online survey of 1,641 like GB voters aged 18+ from 10th to 13th December 2013. Results have been weighted to nationally representative criteria.