Views of immigration are more nuanced than portrayed

For this week’s poll with the Polling Matters podcast, we asked about a series of statements on the subject of immigration to†bring a bit of nuance to the subject that has dominated British politics for the last few years.

If you have paid attention to any polling over the last few years, it will not surprise you to learn that the statements that had the strongest agreement were “immigration places too much pressure on public services like housing and the NHS” and “the current number of immigrants coming to the UK is too high” with 68% and 65% respectively.

However, at the same time, †the statement with the greatest†net agreement (that is, % agreeing minus % disagreeing) is “I want people that come to live and work in the UK to feel welcome”. 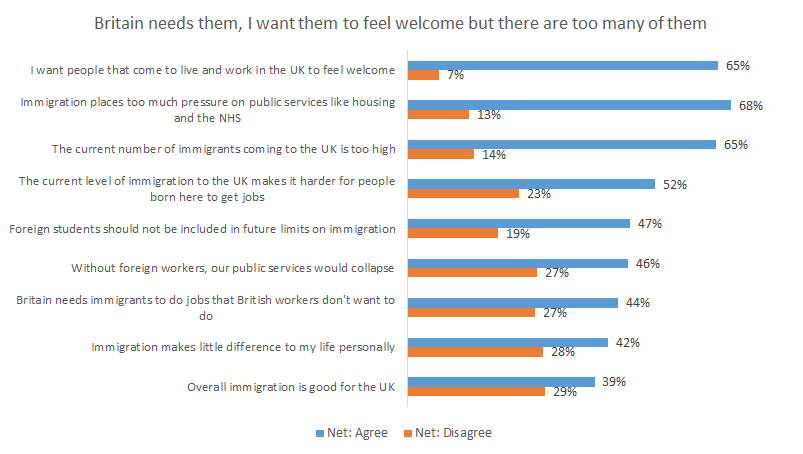 Even the statement with the least overall agreement (that†immigration is good for the UK overall) is met with more agreement than disagreement.

Elsewhere, participants do not believe that foreign students should be included in future limits on immigration levels and believe that the immigrant population in the UK is essential to keep public services running as well as doing jobs that British workers don’t want to do.

Another difference is when we split out responses to each statement by voters of each party and how they voted in the referendum. Just taking one statement, you can see how Leave voters differ from UKIP voters:

An interesting point made on the podcast is that people may answer this set of questions differently as the statements were presented together rather than separately. It allows a respondents who are concerned about immigration levels to spell out what they specifically dislike†rather than having to express this via expressing disapproval of the concept as a whole. Taking the statement above as the one people feel freer to agree with after they have made their concerns about the other aspects of immigration clear, it is interesting†both that strong opposition to the idea of immigrants being made to feel welcome comes from UKIP voters moreso than Leave voters but also that, even among UKIP voters, there is more agreement with this sentiment than disagreement.

Hopefully these results do†what this series of†surveys with Polling Matters is supposed to do and breaks down the monolith to allow the nuances to emerge.