The movie had the best response from social media, with an 47% positive sentiment, was ?The Theory of Everything?, followed closely by ?Whiplash? with 45% positive mentions online. Way behind are ?Selma? (33%), ?The Great Budapest Hotel? (32%), ?Boyhood? (31%), ?American Sniper? (30%) and ?The Imitation Game? (27%). Surprisingly, ?Birdman? is the movie with the least positive sentiment of all the nominated movies with only 20%.

The sentiment online, generated through people talking about the movies, is not in line with the volume whatsoever. Scraping the quantitative volume of movie mentions, American Sniper has over 39% of share of voice, due to the strong controversy around that movie. This controversy also led to the highest percentage of negative sentiment within the nominees, with 18% of conversation being negative around ?American Sniper?. Ironically, the most positively evaluated movies online, ?The Theory of Everything? and ?Whiplash?, have the smallest portion of share of voice with each of them having a share of voice of only 3%.

In terms of ?Best Actor?, Eddie Redmayne is the actor with the most positive sentiment relating to his role in ?The Theory of Everything?, with a 9% lead over second-placed Bradley Cooper in ?American Sniper?. The category ?Best Actress? is less clear, as sentiment around the actresses are fairly close with Marion Cotillard leading with 34%, followed by Felicity Jones and Julia Moore with each 31% of positive sentiment relating to their roles.

The research conducted cannot foresee the Oscar winners, but gives an indication of who has made the best showing online.

Check out the Infographic below for more information: 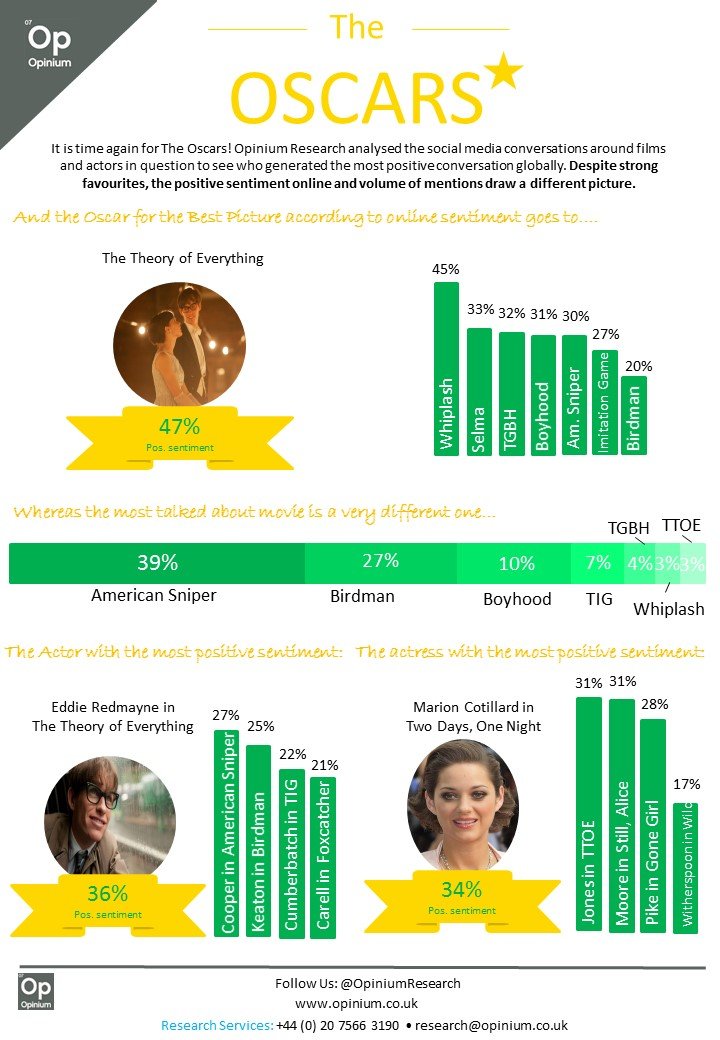