The chart shows the results of three questions:

We then add in the green line which is the Labour lead over the Conservatives in each of the polls where we asked the economy question and, as is obvious, Labour?s lead declines as the proportion of the electorate blaming the Coalition for a poor economy declines.

Where we are now is that Labour?s poll lead has shrunk to just 2% and Coalition ?creditors? are within one percentage point of overtaking ?blamers?. 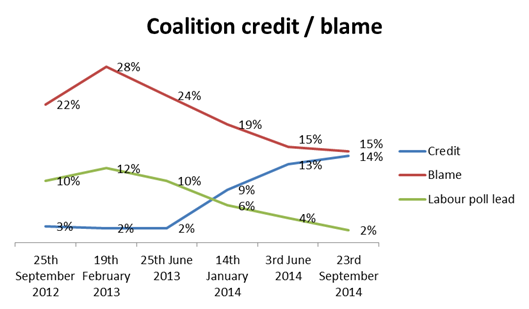 The correlation coefficient between the Labour lead and ?blamers? is 0.97 and for ?creditors? it?s -0.98.

In the last post I said we should expect a Conservative lead sometime soon and my excuse for why it hasn?t happened yet is that we normally ask these every 6 months but did so this time because of the conference season so it?s technically about 3 months early.

Nevertheless, the oldest and most boring rule in politics appears to be holding remarkably well and the economic trends certainly appear to be clear. The proportion of the electorate saying the economy is good has jumped from 7% to 31% in the past two years while the proportion saying the Coalition are responsible for the economy (whether good or bad) has quite naturally risen the further away from the last election we get.

The possible good news for Labour? The “blame” line looks to be leveling out slightly but if, as we expect, the proportion saying the economy is ?good? continues to rise then that elusive Conservative lead should follow.