The changing face of the US electoral map

We are by now familiar with an electoral map of the United States: a sea of red encircled by blue on the western and north-eastern fringes. The map has changed only slightly†since the 2000 presidential election.

Unlike the UK, that has had pretty†stable voting patterns for decades, the US political map did not always look like this. To demonstrate how†it has†changed over the past seventy years, we’ve created two maps which shows the average party lead in each state over two 16 year periods. We’re comparing how the US states voted between 1944-56 and 2000-2012. Both periods contain two Democratic and two Republican victories, which allows us to easily demonstrate how voting patterns have almost reversed in the United States.

Even eighty years after the civil war, the Democrats’ bedrock lay†south of Chesapeake Bay, primarily in a string of states between Texas and North Carolina. Conversely, the north and west tended to vote Republican. But, since the Second†World War, the map has seen an almost complete reverse.† 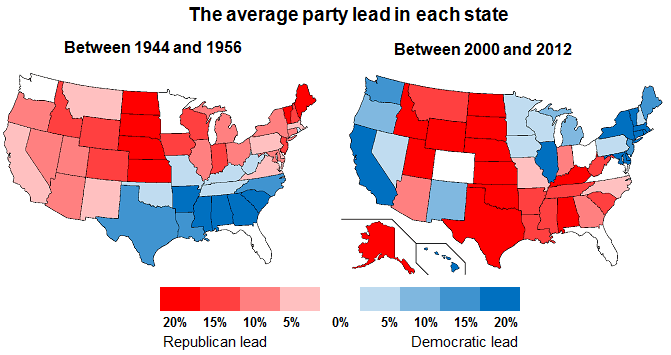 The ‘Solid South’ was shaken by northern Democrats who moved to improve civil rights after the war, angering their conservative Democratic colleagues. The South ‘rebelled’ against the Democratic presidential candidate with third party and non-official candidates in 1948, 1960 and 1968. In 1964, the Deep South even voted for Republican Barry Goldwater in opposition to Lyndon Johnson’s support for civil rights. But it was†in the 1980s that the South switched allegiance to the Republicans for good.

It was while the South began questioning its historic support for the Democrats that the north east coast started moving in the opposite direction. The Democrats gained ground here in the 1960s under Kennedy and Johnson, but†it was†in Bill Clinton’s 1996 victory that the party†gained†an insurmountable lead. Since then the Democrats’ popular vote lead over the Republicans north of the Mason-Dixon line has been at least 13 points higher than nationally.

These aren’t the only changes though. The US was not as geographically†polarised as it is†now. In the 1940s and 1950s there was still a healthy mixture of Democrats and Republicans in every corner of the USA, with the exception of the ‘Solid South’. Since 2000, 6 out of 9 census regions have voted heavily for one party or the other, with†popular vote leads stretching into the double digits.

This means that a far smaller number of states have become crucial in deciding who will be President. In the last four presidential elections, only 10 states have changed hands. In contrast, the four elections between 1944 and 1956 saw a whopping 36 states change hands at some stage.

Also underestimated is the big demographic changes in the USA.†Although the map might look the same as it did sixty years ago – with the exception of the addition of Alaska, Hawaii and DC – the relative electoral importance of each state has noticeably changed.

The population has shifted southwards and westwards. Most drastically, the number of electoral voters allocated to Florida has tripled from 10 to 29 over the past sixty years. However, the majority of growing states†are in the west, which is dominated by Democratic California increasing its EVs from 32 to 54. But smaller swing states in the Mountains have also gained in relative size: Arizona, Nevada and Colorado’s collective electoral votes have doubled from 13 to 26.

This is an excellent summary of the route that American politics is going on. Clinton’s political heartland is right where the solid Democrats are; in and around her New York base. This is essentially old America that is declining in electoral importance. Her victory depends on reaching those growing swing states in the south and west of the country that are fast becoming the real focus of political life.

Bush won these states in a victory of small town America over the big cities, and now Hillary Clinton hopes to swing some of them in a coalition of minorities and liberal America. The huge demographic and social changes the USA is going through makes that possible, but it’s not as easy as some of us in Britain might think.