If the Conservatives do win this election comfortably, it will (unsurprisingly) be because of Theresa May and Brexit.

This general election will be fought on terms that are very different from what we?re used to. Two years ago we listened to a relentless barrage of slogans from Conservative politicians emphasising their party?s credibility on the economy. Now we see the Conservatives doing their best to emphasize their stance on Brexit. 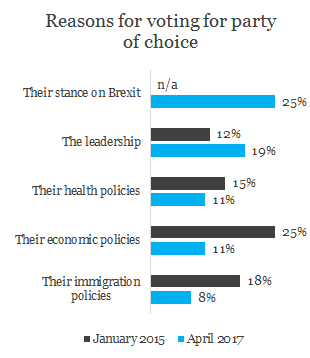 In 2015 and last week†we asked voters what was the single thing driving their vote choice, and we found that the Conservatives have been even more successful in dominating the early stages of the campaign than in the last general election.

The effect it?s had on the Conservative vote is striking. In 2015, half (49%) of Tory voters said they sided with the party mainly because of their economic policies. That has now fallen to only 14%. Now the main drivers for voting Conservative are the party?s leadership (31%) and stance on Brexit (31%) in equal measure.

Brexit is also driving the Lib Dem vote. Half (50%) of those currently intending to vote Liberal Democrat state the party?s position on Brexit is the main reason why they intend to do so.

We also asked voters what was putting them off voting for each party. What we were able to get from this is the net effect the party?s stance on a particular policy area was having for its vote share.

For example, 10% of all UK adults said they were voting for the Conservatives because of their position on Brexit, while 3% named it as the reason why they were not voting Conservative ? so we can say that the party?s stance on Brexit has contributed net 7% of all potential votes up for grabs. 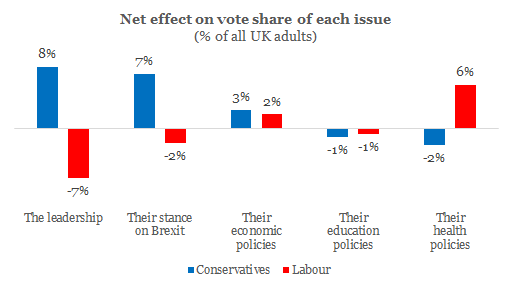 For the Conservatives this shows how important it is for them to keep the election about Theresa May and Europe – they are both massive net gainers for the party. The economy is also an auxiliary net gainer for the party, but Labour does at least have an economic narrative with which to respond.

What they don?t want is to get bogged down on domestic issues such as the NHS, which is the biggest drag on the Conservative vote share, and also the biggest contributor to Labour?s.

Unsurprisingly, the results demonstrate how much of a bind Brexit is for Labour ? an equal number of Leavers and Remainers say they are not going to vote for Labour due to the party?s stance on Brexit.† However, it?s the leadership that is the main sore spot for Labour, and nothing can be done about that between now and the 8th of June. ††