Slashing the number of MPs is popular, but what does it mean for the regions?

Despite how controversial†the†boundary†review is proving in Westminster, the public seems more than happy†to push dozens of MPs into early retirement by abolishing their seat.†But while sitting members scramble for a new seat and opposition parties complain about gerrymandering, we’ve examined the impact on the†different†regions.

The eye catching commitment to reduce the number of MPs to its smallest number since Irish independence seems to have public backing. Half (50%) of UK adults believe that there are currently too many MPs, while only 25% think the current number is about right.

Some of the cities that are likely to be hit by the current review, such as London, seem to narrowly support a change in how they are calculated. Two in five (41%) Londoners†support basing boundary reviews on the number of residents rather than electors.

London is a particularly interesting case. Based on the latest adult population estimates from the ONS, the capital should be entitled to something approaching 78 seats out of 596 if all adult residents were taken into account. However, the powers that be have allocated the capital only 68 constituencies. Perhaps the city’s politicians would be wise to push for a change in the way boundaries are drawn in future.

One thing we weren’t able to track is whether voters have the vaguest understanding about how marginal their seat will be after the review. I suspect they have none. Nevertheless, the drastic changes means the battleground at the next election will look quite different.

Of the 30 most marginal Tory seats on the current boundaries, 13 are currently in Southern England. Only 3 are in London, as many as there are in Wales. A further 11 are in the Midlands and the North. According to the†notional results†attention will drift towards less typical Tory territory. The number of these ultra marginals will drop in the South to 10. On the other hand the number in London will double to 6. 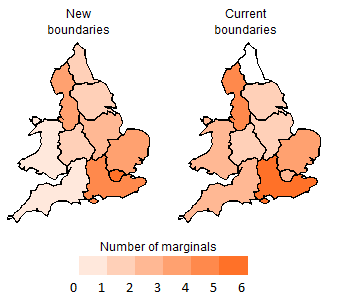 Some other regions will lose most of their marginals. Wales, which would have been a key battleground with 3 wafer thin marginal, now has only†one seat†to spark interest. Similarly, the South West has three key marginals on the current boundaries, but this drops to merely one.

On the other hand, the North East becomes a region of serious electoral interest once again. The new Stockton West is a slightly more marginal seat than the old Stockton South, bringing the Durham market town into the list of the thirty most marginal constituencies. Darlington, the former seat of Blairite Alan Milburn, has been the subject of a sizeable redistricting – making it, notionally at least, one of the most marginal Tory seats in the country.

These changes will prove to be important. The†parties will have to think strategically about where they concentrate their efforts in the months and years leading up to the next general election. However, if any side were hoping to cry foul that the new boundaries are unfair, the general gist of having less politicians seems to be popular enough to ensure the review isn’t derailed.