Rest of Britain to Scotland: We want you to stay!

Rest of Britain to Scotland: Stay! 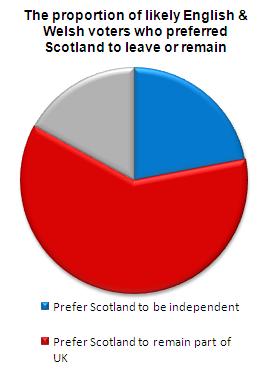 English and Welsh voters do not seem particularly pleased at the thought of the breakup of the Union, with six in ten (61%) saying they preferred Scotland to remain a part of the UK, with 22% preferring Scotland to leave. When we asked voters to forecast the result a majority (52%) thought the Scots would vote to stay.

Underlying all our results is quite a generational gap. For example, only 13% of the over 54 age group prefer Scotland to leave, compared to a third (33%) of younger voters.

When we asked GB voters how they saw independence working in practice, most seem unsympathetic to the ideas of Alex Salmond. Three quarters (76%) think Scotland should have to pay for its fair share of the UK?s debts and two thirds (67%) agree that Scotland should have to re-apply to join the European Union rather than automatically remaining a member.

Less clear cut where the public?s views on the pound and oil, although most voters thought that Scotland should not keep the pound (46%) nor have exclusive ownership of North Sea oil (41%).

Some of the clearest patterns from the results is the generational divide on a number of issues. In many cases the younger generation tended to be more generous to Scotland and even Alex Salmond?s vision of independence ? for example, 18-34 year olds were evenly divided on whether Scotland should keep the pound (both on 41%) while a majority of over 54?s thought Scotland should not be allowed to use the pound.

The younger generation, while simultaneously being more generous to Scotland and more happy to prefer their independence, were more likely to believe it will damage the other UK nations. Over a third (36%) of younger voters thought Scotland?s separation would result in a knock for the worldwide influence of the rest of the UK, compared to a fifth (20%) of older voters.

Opinium Research carried out an online survey of 1,663 likely GB voters aged 18+ from 25th to 28th February 2014. Results have been weighted to nationally representative criteria.