The Conservatives have fallen back slightly on last week, although they have retained a 2-point lead in the polls.

Labour is up one point, on 40%, while the Conservatives are down one point to bring them to 42%.

Jeremy Corbyn has seen an improvement in his leadership ratings, going from a net rating of -18% last week to -13% this week. Theresa May?s ratings have remained stable on net -8%. 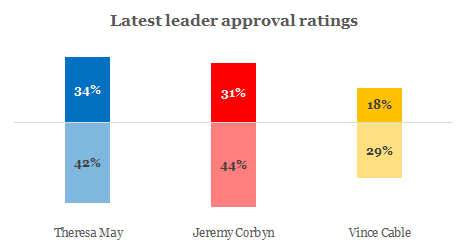 Theresa May?s lead over Jeremy Corbyn on who would make the best prime minister has dropped from 13 points to 10 points (currently it stands at 35% for May vs 25% for Jeremy Corbyn).

This is the smallest gap between the two since March.

How likely is Brexit to happen?

If it looks unlikely that Theresa May can deliver Brexit by the original timeline of March 2019, half (50%) think she should resign as prime minister in favour of someone who has a greater chance of delivering Brexit.