The Conservatives are up three points this month, in the first opinion poll since the local elections, giving them their largest lead since the general election.

Despite the improving fortunes of the Conservative Party there have not been any major changes in the leadership ratings of the leaders. 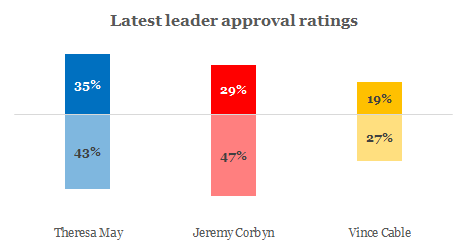 However, Vince Cable’s net approval rating has noticeably increased since the local elections, rising from -18% in April to -8% this month.

Theresa May?s lead over Jeremy Corbyn on who would make the best prime minister has risen slightly from 12 points to 13 points (currently it stands at 36% for May vs 23% for Jeremy Corbyn).

Currently 33% trust the Conservatives most to handle the Brexit negotiations compared to 20% for Labour. The Conservative lead of 13 points on this issue is the largest since the general election. 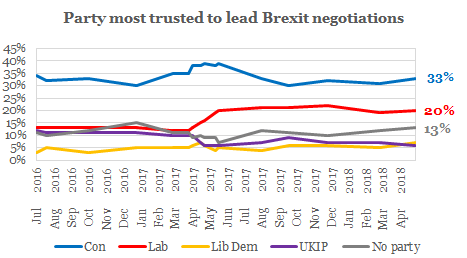 Interestingly, Remainers appear to be losing trust in Labour on Brexit. In December 2017 a third (34%) of Remainers trusted Labour most on Brexit while 22% trusted the Tories most. This month only 27% (-7%) trust Labour the most compared to 24% (+2%) for the Conservatives.