The Conservatives have expanded their lead over Labour from 7 points to 13 points in our latest voting intention poll. 40% (+3) would vote Conservative in†a general election tomorrow, 27% (-3) would vote Labour, 14% UKIP (n/c) and 8% Lib Dem (n/c).

In the wake of his recent controversies in Stoke, UKIP leader Paul Nuttall has seen the percentage disapproving of †his performance increase from 34% to 42%. With virtually no change in the percentage approving, this change comes largely from the bulk of voters who have no opinion about him forming a negative view. 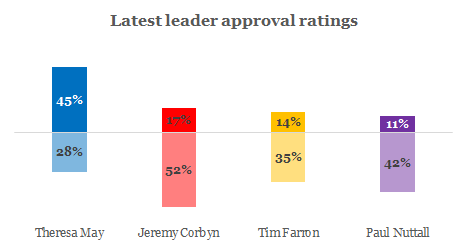