Conservatives†re-take the lead in the polls after their poor showing in the wake of the fall out from Chequers. The Tories now have a 1-point lead.

Labour have dropped 2 points to 38%, while the Conservatives have risen by 3 points to 39%.†

Theresa May?s leadership ratings have stabilised and risen slightly from -24% last month to -21%. Meanwhile, Jeremy Corbyn?s ratings have plumeted from a net rating of -12% to -24% this month. 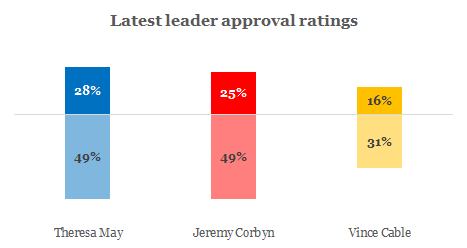 However, Theresa May?s lead over Jeremy Corbyn on who would make the best prime minister has edged up slightly from 4 to 6 points (currently it stands at 30% for May vs 24% for Jeremy Corbyn).

On the other hand, a considerable number perceive there to be an issue with the Conservative Party and Islamaphobia: