Last week’s Opinium / Polling Matters survey looked at what voters, and Leave voters in particular, want from the eventual Brexit deal. In particular, in light of recent comments by ministers that†Freedom of Movement and contributions to the EU budget may continue after Brexit, we looked at whether or not Brexit would still be “worth it” to these voters if various conditions were not achieved. 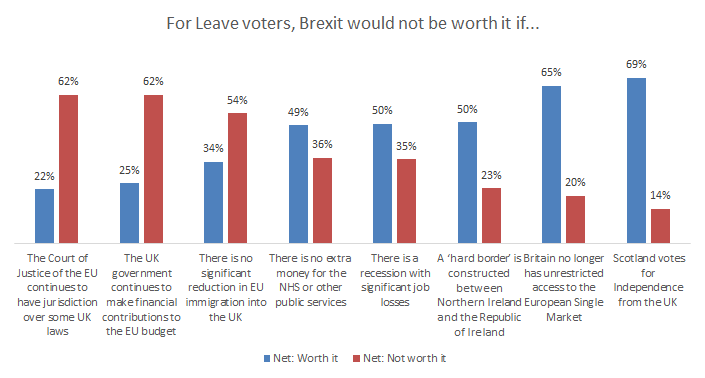 The threat of possible Scottish independence from Britain is seen as a worthwhile trade off by 69% of Leave voters, as it the loss of unrestricted access to the EU’s single market.

A “hard border” between Northern Ireland and the Republic is also seen as†worth it†in order for Britain to leave the European Union.

Where Leave voters are less sanguine though is around the elements which may play a large part in a final deal, namely the†jurisdiction of the EU Court of Justice, contributions to the EU budget and reducing immigration.

Over half (54%) of leave voters stated that if there was no significant reduction in EU immigration into the UK, then the decision made on the 23rd of June 2016 would not have been worthwhile.†Similarly, if the British government were to continue to financially support the EU budget, over three fifths of leave voters (62%) would consider Brexit to be a wasted opportunity. †

The issue of sovereignty would dishearten leave voters the most, however, with 62% believing that if the UK is unable to obtain full control over its laws then Brexit would not have been worthwhile, compared to just 22% who would still think independence was meaningful.