When we asked Brits if the Government should intervene to seek to prevent the takeover of AstraZeneca or allow it to continue, only a tenth (9%) thought that the takeover should be allowed to proceed without any intervention.

Most Brits were divided between intervention or conditional acceptance. Just over a third (35%) thought the takeover should be allowed only if Pfizer promises not to cut jobs or investment, while (34%) thought that the Government should intervene to seek to prevent a takeover completely.

Older Brits the most worried

One of the biggest divides was between the generational difference in opinion. 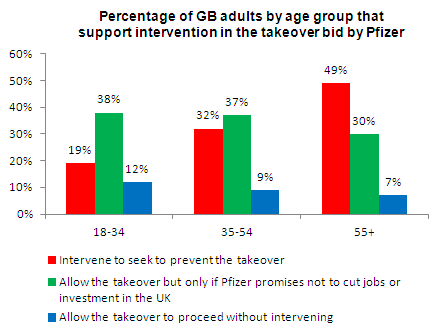 Older respondents were far more clearly in favour of intervention, with a half (49%) of over-55’s believing the Government should prevent a takeover. By comparison, only a fifth (19%) of 18 to 34 year olds agreed, with many of the younger generation preferring (38%) a conditional takeover with protection for jobs.

Opinium Research carried out an online survey of 1,972 GB adults aged 18+ from 6th to 8th May 2014. Results have been weighted to nationally representative criteria.