When asked about the specific deal announced by the government at the beginning of this week, only one in six (16%) thought building new nuclear power stations in the UK such as the one at Hinckley would help decrease their own energy bills in the future. This suggests that at least immediately there is some scepticism that nuclear energy will result in themselves being better off.

However, this does not mean Britons view it as a bad thing. In fact, 44% agree that the UK needs to build more nuclear power plants to keep energy bills as low as possible ? suggesting that even if bills won?t go down, without nuclear power they would probably go up even more! Men seem to be prepared to rely on nuclear power far more than women, with 56% thinking nuclear power is needed to keep down costs, compared to only 32% of women. 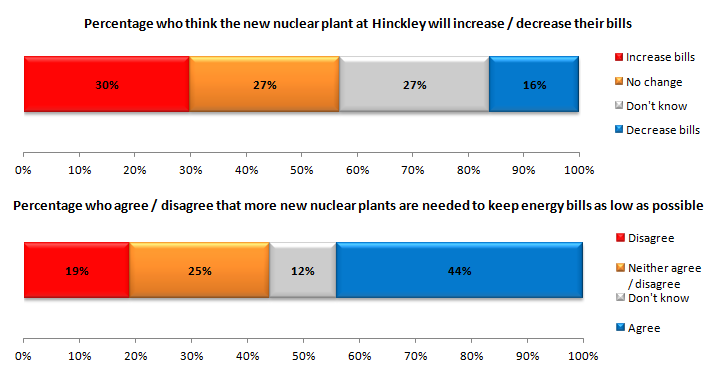 The possible dangers of nuclear power don?t seem to worry most British adults, although one in three (29%) agree that nuclear energy is too dangerous to risk building any more. However, it is clear that the public do not want the government to simply rely on building a whole generation of nuclear plants to plug our energy gap without investigating more sustainable energy solutions.

A majority (51%) say that energy policy should concentrate more on renewable energy than nuclear power, suggesting that a sizeable portion of the public recognise nuclear power?s usefulness, but still view it as a stopgap before we have to deal with our long-term problems.

Opinium Research carried out an online survey of 2,001 UK adults. Results have been weighted to nationally representative criteria. The research was conducted from 21st to 23rd October 2013.