Banning the burqa
When we asked 2,000 UK adults about the possibility of outlawing the burqa, two thirds (68%) agreed that the garment should should be banned in public places, including 71% of Londoners, with only 14% disagreeing. 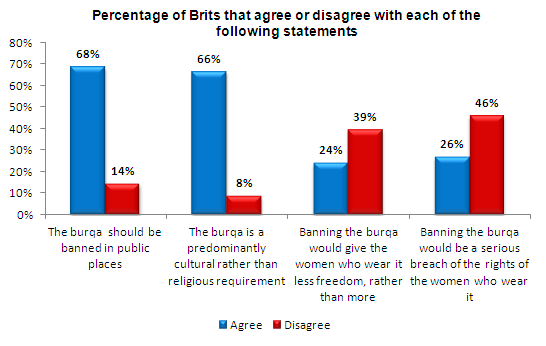 When we drilled down further into the public’s thoughts, we found that 66% of Britons thought the burqa is a predominantly cultural rather than religious requirement, and six in ten (62%) agreed that what people wear in public places is a legitimate topic of public debate and discussion.

Rights a concern for some Brits

However, there was roughly a quarter of adults who seemed to have serious reservations, with 24% saying a ban would actually give the women who wear it less freedom, and 26% saying that it would be a serious breach of their rights.

There also appeared to be quite stark generational divides in opinion, with two in five (40%) young Brits (aged 18-34) agreeing that a ban would be a breach of rights, compared to only 16% of those aged 55 and over.

Opinium Research carried out an online survey of 2,004 UK adults aged 18+ from 4th to 7th July 2014. Results have been weighted to nationally representative criteria.