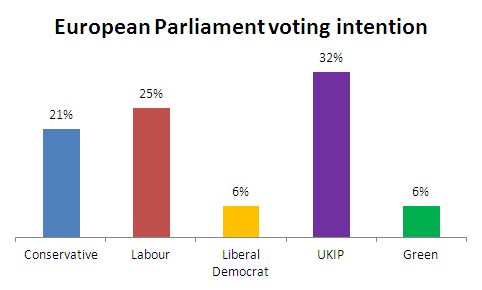 Until recently, Labour were a very close second but the gap has opened up in the last few days before the election with Labour dropping to 25%. The Greens have also crept steadily up to the point of challenging the Liberal Democrats for fourth place.

Opinium Research carried out an online survey of 1,967 GB adults aged 18+ from 19th to 21st May 2014. Results have been weighted to nationally representative criteria and filtered to those likely or certain to vote, taking into account past voting behaviour in European Parliament elections.