Corbyn ahead until the last

But second preferences split in favour of Burnham

When we asked ordinary Labour voters to rank the four leadership contenders in order of their preference, 35% selected Jeremy Corbyn as their first preference, while 29% chose Andy Burnham. Yvette Cooper on 21% and Liz Kendall on 14% came third and fourth respectively.

When we re-allocated Liz Kendall’s votes, Burnham and Cooper were the main beneficiaries, with Corbyn rising four points to 39%, but Cooper and Burnham slightly further to 26% and 35% respectively. 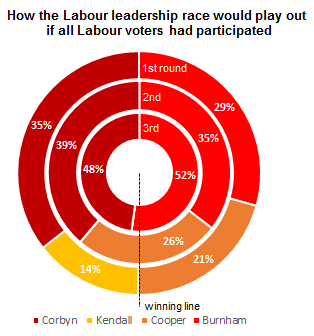 But in the final round, the second and third preferences of Kendall and Cooper split two-to-one in Burnham’s direction, which could prove crucial if Corbyn is not very far ahead in the first round on Saturday the 12th.

Opinium Research carried out an online survey from 4th to 8th September 2015. Results have been weighted to nationally representative criteria.