Spending intentions down down down over the next six months, however supermarkets could be the winners if they play it right.

The key factors that determine consumer spending can be summarised as follows:

The willingness of consumers to make major spending commitments depends on how confident they are about both their own financial circumstances, and also the general state of the economy. We have not tried to predict consumer spending levels, rather, our objective was to conduct research allowing us to get a sense of how consumers will prioritise their future spending habits in what we believe to be some key areas.

With the annual increase in the cost of living rising to 5.2% during September, and still high at 5.0% in October, driven by the soaring price of essentials such as heating and lighting, petrol and food, economists have warned that consumers will continue to tighten their belts and there will be a major squeeze in consumer spending which could support a tipping of the economy into a double dip recession.

Unfortunately the results of our second Hopes & Fears research study into consumer spending intentions back up this forecasting. Our research shows that consumers intend reducing their spending even further in the next six months with fairly drastic intended reductions across the board.

Over the next six months our research indicates that the businesses that will feel the most pain from any proposed consumer cutbacks will be the take away food industry, businesses operating in the tourism industry and businesses aligned to the pub, bar and nightclub sector, where most consumers told us that they will be looking to spend less.

The tables below show all of the categories we studied and where we asked consumers to state their spending intentions for the next six months. It?s very clear from a quick glance at the data that a large percentage of consumers are intending making cutbacks in a number of areas, while far fewer consumers intend spending more.

Whether by choice or by the fact that transport costs continue to escalate, 29% consumers say that they intend spending more on transport in the next six months.

Some good news for the big supermarkets is that 23% of consumers intend spending more on grocery shopping in the next six months. This is surely an attempt to save money by eating and drinking out, or having takeaways, less often and spending more at supermarkets to economise. But it won’t be easy for the supermarkets as our research shows consumers will shop around for the best deals, buy value ranges, use coupons, etc. 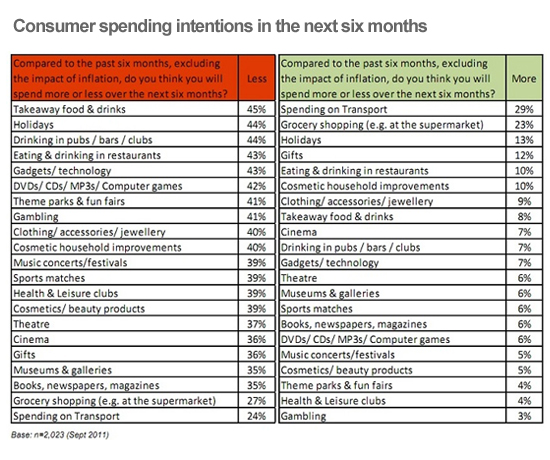