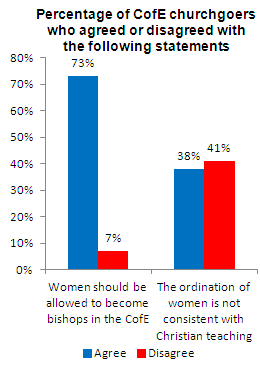 When we asked if women should be allowed to become bishops in the Church of England, nearly three quarters (73%) of Anglican churchgoers agreed, with only 7% disagreeing. Churchgoers seemed to give clearer support than the population as a whole, with 56% of UK adults in support.

This is despite four in ten (38%) churchgoers agreeing that the ordination of women is not consistent with Christian teaching.

By comparison, we found the issue of female priests was more controversial in the Roman Catholic Church – 45% of Catholic churchgoers were in support of reform, and 34% were opposed.

The public’s attitude to the enforcement of gender equality appears to be quite divided, with 44% believing that the issue of the ordination of women should be entirely a matter for each Christian denomination to decide, and 38% on the other hand agreeing that gender equality in religious organisations should be enforced by law.

Perhaps most significantly, the wider public doesn’t automatically regard this religious issue as irrelevant, with 46% agreeing that female ordination is an important issue for the 21st century, rising to just over half of women (52%).

Opinium Research carried out an online survey of 2,003 UK adults aged 18+ from 11th to 14th July 2014. Results have been weighted to nationally representative criteria. Included in this was a sample of 85 Church of England churchgoers and 53% Roman catholic churchgoers.