Just over half (56%) of couples say they have had an argument on holiday, with the most common cause for disagreement being driving instructions (39%), followed by disagreements over spending (18%) and deciding where to eat or drink (14%).

This seems to be a problem among the young more than older generations, with twenty-something couples being twice as likely as those in their 60s to have had an argument over directions abroad (38% vs. 21%). This may partially be down to digitalized young couples having to resort to unfamiliar traditional paper maps when abroad – 41% of couples use paper maps to find their away on holiday.

This looks like it might be having lasting negative effects with some couples saying they have even broken up with a partner after map-reading related arguments abroad, although interestingly men where three times as likely to boast that they had done this. Similarly, just over half (55%) of men said they thought that they are better at map reading than their partner.

Find out more in this article from the Daily Mail. 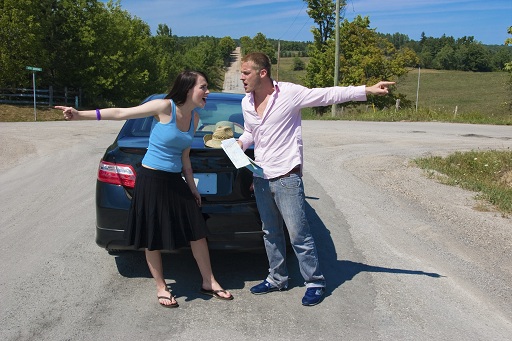 Opinium Research carried out an online survey of 2,003 UK adults aged 18+ from 23rd to 26th September 2014. Results have been weighted to nationally representative criteria. From this came a sample of 1,388 UK adults in relationships.