Popular across the political spectrum 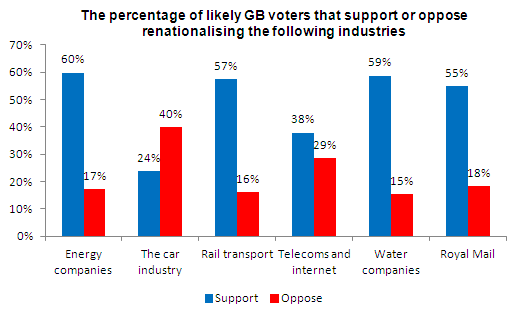 It is a measure that seems to be supported throughout the political spectrum, with even half (51%) of Conservative voters backing the measure.

Voters were even more supportive when the idea of simply failing to re-new the private franchises at the end of their current contract was suggested, with two thirds (66%) supporting this course of action, and the proportion opposed dropping to 12%.

Are cheaper tickets the key?

From the graph below, it appears that there is a general belief among voters that services would improve once the railways have been taken out of the private sector.

However, in particular, half (51%) believe that ticket prices would be ‘better’ (likely interpreted as ‘would fall’) after renationalisation. Here there were more differences between the parties, with 60% of Labour voters thinking prices would drop, while only 46% of Tories thought the same. Voters were least convinced that customer service would improve, with only 35% believing it would get better.

Opinium Research carried out an online survey of 1,694 likely voters. Results have been weighted to nationally representative criteria. The research was conducted from 22nd to 25th of April 2014.