Labour?s new leader Jeremy Corbyn drew some flak recently for appointing Guardian columnist Seumas Milne as his communications chief. For those of you unfamiliar with Mr Milne, his views on international affairs can be controversial to say the least. However this may be another case of Mr Corbyn doing something which appalls his opponents but delights his supporters and those with his worldview.Opinium recently ran a joint study with researchers at the University of Bournemouth into what people think of the United States, its relationship with Britain and its role in the world. We thought it would be interesting to look at how Corbyn?s strongest supporters compare with those of the rest of the country. Here we are defining ?Corbyn supporters? as those who strongly approve of the Labour leader and who are around 8% of the total sample.One of the reasons for Mr Milne?s appointment is that his political views closely match those of the Labour leader. Wikipedia has a useful summary of both men?s views (Mr Corbyn, Mr Milne) but it?s fair to say that neither has a particularly positive view of the United States. In this therefore, Mr Milne?s views appear to reflect those of Mr Corbyn?s core supporters.To start with some areas of agreement, both British adults generally and Corbyn supporters broadly agree that US global power is declining (?The US is no longer the global power it once was?) and that Britain is the country in Europe most connected with America (?The American people feel more of a connection with Britain than with other European countries?).The first, and perhaps least surprising, difference is that while Brits have a broadly positive view of the United States, this is much more ambivalent among Corbyn supporters: 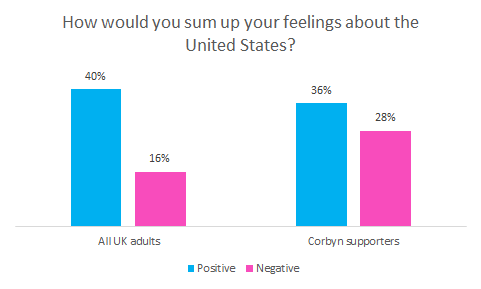 Where Corbyn supporters start to contrast more starkly with public sentiment is in their views of America?s impact on the rest of the world:

Here Corbyn supporters are much more negative compared to the average Brit. This split in opinion is also visible when looking at attitudes towards American foreign policy. While the population generally are ambivalent, but do tend towards a negative view of American foreign policy, Corbyn supporters are almost always more negative.Those who strongly approve of Mr Corbyn are much more likely to say that the 9/11 attacks were the result of US policy (62% agree vs. 41% overall), that US foreign policy is dictated by the need for cheap oil supplies (77% agree vs. 56% overall) and to agree that the US-UK ?special relationship? is on its way out (51% vs. 36% overall).The most interesting figures however came when we presented respondents with a list of countries and non-state actors (such as Islamic State / ISIS) and asked which were the biggest threats to world peace.

Corbyn supporters are more likely to put the USA and Israel in their top three than Iran which was one of the most popular choices among the rest of the population.After Labour?s conference in September the party was accused of talking to itself and having nothing to say to people who didn?t vote for it in May. With Mr Milne?s views on foreign policy, this appears to be another case of Jeremy Corbyn preaching to the choir.