On the surface the story that our polling tells us is largely unchanged, the Conservatives are on course to win a substantially increased majority. What?s keeping pollsters up at night is ?the gap?. Namely the 6% of voters who say that they are 10 out of 10 certain to vote Labour but disapprove of Jeremy Corbyn as leader or prefer Theresa May as prime minister.

Here is how†those who say they’ll vote for each party view their respective party leaders: 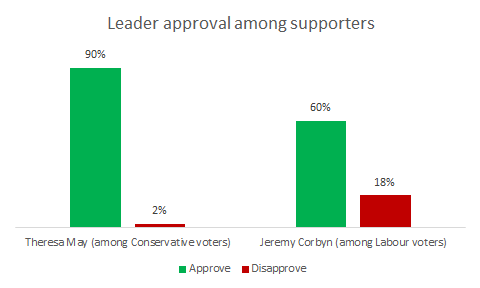 Are these people all going to vote Labour as they say and give Labour 32% of the national vote? Or are some of them going to stay at home? If half of them decide not to bother to vote, then that takes Labour?s vote share from 32% down to 29%. It still means a resounding Conservative victory but, on a uniform national swing, it?s the difference between a majority of 100 and a majority of 150.

We saw something similar with Ed Miliband who ended the 2015 campaign with a 31% approval rating which, conveniently, is the same as Labour?s vote share in that election. Jeremy Corbyn?s approval rating is currently 27% among those certain to vote.

On the other hand, the argument for assuming that these people turn out for Labour is that the election seems so one-sided that voting Labour is more about limiting the size of Theresa May?s majority. Similarly, while talk of a hung parliament with Ed Miliband as prime minister put many people off Labour, in 2017 the party may be a safer option as there is little chance of actually putting Jeremy Corbyn in Downing Street.

Rather than trying to win a governing majority, Labour?s are trying to reinforce as much of their 2015 vote as possible by focusing on traditional Labour strongpoints such as the NHS and public services, and asking those who like Labour but dislike its leader not to give the Conservatives a blank cheque.