The Tory struggle in Scotland

The Conservatives are tipped to gain (and gain big) in Scotland, but the task is a daunting†one.

Some commentators have suggested the Tories could make up to a dozen gains in Scotland. For her part, Ruth Davidson would love to match John Major?s performance north of the border by winning 11 seats. But the electoral mountain she needs to climb is incredibly steep.

We took the average results of the Scottish sub-sample in the eight political polls we’ve published so far this year, which suggests that the SNP are on around 48% (down a couple of points from 2015), the Conservatives are between 27-28% (up around 13 points), with Labour far back in third on 14% (down 10 points).

On the face of it this is great news for the Tories ? an almost eight point swing from the SNP to the Conservatives. On the downside, this only puts 3 seats within the Conservative?s grasp: 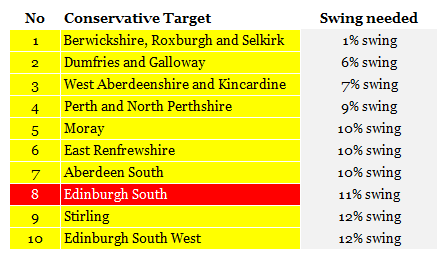 The other aspect of the election in Scotland is that there isn?t an obvious drop in the SNP share of the vote, at least none of any serious consequence. This suggests the movement towards the Tories is almost entirely from within the unionist vote. If so, we should emphasize that this swing between the SNP and the Tories is nothing but a mathematical average and should not be applied to any particular seat.

To model a situation that our polling suggests is possible, how well would the Tories do if we took half of the vote of the other unionist parties at the last election and added it to the Conservative total? What we found is that there could be 5 Tory gains, one of them being the last Labour seat in Scotland. 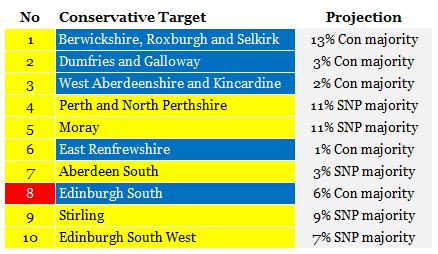 This shows how the simple swing information is not enough to adequately tell the story in Scotland. Berwickshire is a very thin marginal anyway, but here and in harder to reach East Renfrewshire there are big unionist votes to squeeze for the Tories ? In short, they are seats where the SNP won almost purely because of a divided unionist vote.

However, in seats like Perth and Moray the SNP previously had half the total votes cast meaning the Tories can go on squeezing what few Labour and Lib Dem voters there are and never catch up with the SNP.

Another thing that must be considered is that the Tories are not in second place in East Renfrewshire. Very simple questions can be posed in many cases that casts doubt on in the likelihood of Tory gains, such as ‘would an anti-SNP vote help or hinder the Tories if they are not in second place?’. This model also suggest the Tories could be close to taking Edinburgh West (target 16), but once again this would require half of the 18,000 Lib Dem voters moving over to join the Tories who were on less than 7,000 last time. Why would they do that if the aim is to unseat the SNP?

This is even clearer cut for Edinburgh South?s voters. Why risk handing a Labour seat to the SNP in an attempt to install a Conservative? †

Put simply, the Conservatives might be likely to do well in terms of votes on the 8th June, but the electoral map makes more than 3 or 4 gains north of the border look very difficult for them indeed.