The Labour leader promised to hold an in/out referendum in the event of a significant transfer of powers between Westminster and Brussels but in reality this merely recognises the law passed earlier this parliament which requires a referendum in such circumstances anyway. Even then, ?significant powers? is up to the minister in charge so it?s hardly a promise of a vote.

This would also appear to be quite an unpopular decision given that polls on this topic frequently show that a majority of British voters want a referendum on EU membership (although I?ve addressed this point before). However, I think Miliband has been paying attention to the polls, just a different question.

These figures come from the same poll where the overall vote shares looked like this: 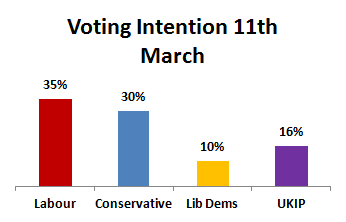 Let?s look at what happens if we remove 2010 Lib Dem voters from the chart:

This group of 2010 Lib Dems are also far more pro-European than average. Here are 2010 Lib Dems vs. all voters on how they would vote in an EU referendum:

Keeping these defectors on side through 2015 is the key challenge for Ed Miliband and explains why both Miliband and Nick Clegg have taken pains to avoid the more Eurosceptic line taken by the Conservatives and UKIP. In fact this poll and the one before it were the first in many months where we?ve shown the Lib Dems climbing back into double figures while the Labour lead has slipped back.
It?s never a good idea to ascribe movements in polls to individual events but I wouldn?t be too surprised if Nick Clegg?s decision to define the Lib Dems publically as the party of Europe hasn?t won a few Lib Dem-to-Labour defectors back to the fold. While Europe has dominated the political conversation for a while now, this is a side of it that isn?t much reported but is very important.