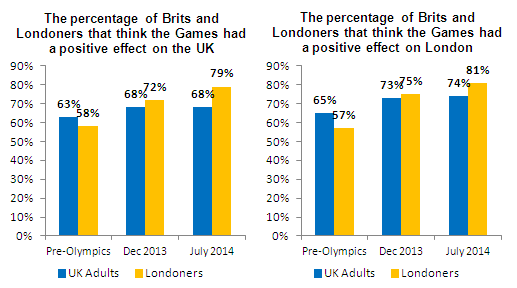 The improvement has been even clearer among Londoners. Roughly 57% of Londoners before the opening ceremony thought the Games would have a positive impact on London, which has now risen to four fifths (81%).Olympic promiseJust after the Olympic Games 18% said the Olympics had inspired them to take up either a new sport or one they use to do ? although this dropped to 9% in December last year, it has now risen again to one in six (15%), suggesting that the Games are still having a lasting effect on many of the people it inspired in the summer of 2012.When we asked whether the five promises that the government made had been upheld, we found the responses were a mixed bag. On the positive side, a significant number of Brits still believe that the Games transformed the East End of London (38%), rising to almost half (48%) of Londoners.

However, other promises seemed to have faded away. During the euphoria of the Games, 45% thought that the Games would inspire a generation of young people, which has now dropped significantly to 30%. In addition, the number of UK adults that thought none of the promises have been delivered has risen from 24% just after the Games, to 30% now.Downsides to the OlympicsEither way many Brits are still skeptical about the cost of the Olympics, with six in ten (60%) agreeing that the stadium was too costly considering its use after the Games finished, while 57% agree the the government let spending get out of control, despite the Olympics being a good thing.However, this doesn’t mean that the public has developed an entirely negative view of the cost over the past two years, with half (51%) agreeing that any money the government spent on staging the Olympics was worth it.Rio 2016 and the Commonwealth GamesWe then asked some questions about the Rio games in 2016, and found that 13% of UK adults say they will consider going to the Rio Games, up from 8% in December. However, the public is still undecided about whether the organisation and presentation of the Rio Games will be better or worse than London’s (18% say better, 23% say worse).Turning to the Commonwealth Games that took place recently, only 14% of Brits said that the organisation and presentation of the Glasgow Games were better than the London Olympics, while twice as many said it was worse (27%). However many said either they were the same (26%) or they couldn’t say (34%).Opinium Research carried out an online survey of 2,002 UK adults. Results have been weighted to nationally representative criteria. The research was conducted from 25th and 29th July 2014.Opinium Research also carried out an online survey of 2,006 UK adults, and was conducted from 29th November to 3rd December 2013. Results have been weighted to nationally representative criteria.Opinium Research carried out the original research in several surveys before and after the 2012 Olympic Games. Results were weighted to nationally representative criteria.