The order of support among the candidates remains unchanged from our last poll, with the long-standing backbencher Jeremy Corbyn ahead of Shadow Health Secretary Andy Burnham. Yvette Cooper and Liz Kendall remain in 3rd and 4th place respectively.

Opinium surveyed ordinary Labour voters, rather than party members and those who have a vote in the leadership contest, and found Mr Corbyn’s lead over Andy Burnham had risen from 8 percentage points to 12. 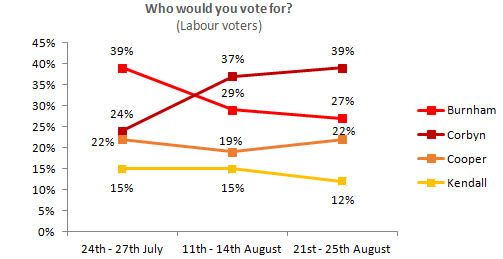 Yvette Cooper has seen some improvement in her numbers from 19% in mid-August to 22% in our latest poll, while Liz Kendall has dropped from 15% last time to 12%. The gap between Andy Burnham and Yvette Cooper has also halved since our last poll, down from 10 percentage points to 5.

Opinium Research carried out an online survey of 1,936 GB adults aged 18+ from 21st to 25th August 2015. Results have been weighted to nationally representative criteria.