The final week and a look at how we got here

The final week and a look at how we got here

A month later and with two days to go before the election those figures are exactly the same except that Labour and the Conservatives have swapped places.

At the risk of sounding like a broken record therefore the election remains too close to call with the Conservatives slightly favoured to get more votes and seats than Labour but Labour better placed to form a government due to the disposition of the various other parties such as the SNP.

Over the course of the campaign there are a few things that we have tracked to give us an indicator of how the polls might change so here we?d like to go through a few of them to help explain why the overall figures remain so close.

So let?s start with the leaders. Here is a chart showing how David Cameron and Ed Miliband have seen their net approval ratings change since the beginning of 2015. To smooth things out a little the figures show a moving average of four polls: 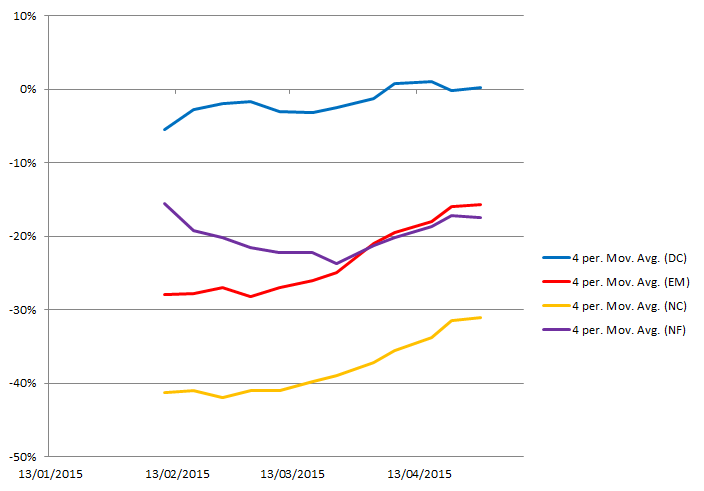 So a definite improvement for Ed Miliband and also Nick Clegg but David Cameron is currently recording the highest net approval ratings we have ever seen for him. The flaw here is that we only started tracking in late 2011 so we missed any honeymoon period he might have enjoyed as well as those from when he was opposition leader and enjoying big leads over Gordon Brown.

Nevertheless, for a prime minister in a multi-party system whose party is supported by barely a third of the electorate this helps show why David Cameron is seen as such an asset to the Tories.

This week we repeated our questions about what the most important issues are for Britain generally and respondents personally. The figures for the top six were as follows:

The biggest here are clearly health / NHS, the economy and immigration but when we filter to the most important issues facing you personally we are left with just health and the economy as the clear leaders.

Here?s another indication of why things are as close as they are. More people say the NHS is important than mention the economy but the Tories have a bigger lead on the economy than Labour do on health:

The Conservatives? lead among those who say the economy is one of their top 3 issues is larger than among all voters. This is another measure that we have been tracking for some time and compares David Cameron and George Osborne against Ed Miliband and Ed Balls. The Conservative team still leads but?

The Tories? lead on handling the economy is shrinking (slightly)

Here is how respondents have answered this question since the start of the campaign:

So the Conservatives are still commandingly in front but Labour?s figure has ticked up a little to eat into that lead.

However, the saving grace for Labour may be that the large number of Lib Dem and Green voters who are likely to change their minds means that they may switch to Labour.

Lib Dem voters are generally evenly divided between preferring the Conservatives and Labour but Green voters are much more pro-Labour. The softness of Labour?s vote therefore may be compensated by the fact that Labour-Green switchers are less entrenched with their new party than Conservative-UKIP switchers.

Where does this leave us?

With a confused prediction and likely a confused result. This election looks like being one which defies traditional certainties as the party that leads on handling the economy and having the best leader should be a favourite to win. In a two-party system that might be enough and we do expect the Conservatives to narrowly beat Labour in the popular vote and on the number of seats held. But, because the total vote and seat share of the two main parties combined has fallen over the past few decades, being the largest party no longer guarantees that you can form the government.

In the past it was enough for the Tories to just beat Labour. Now they have to beat Labour and everyone else and while the first seems probable, the second seems very unlikely.