The effects of friendly-fire?

The effects of friendly-fire?

For most of the last 12 months, Mr Miliband and David Cameron have had similar ?net? ratings as fewer people approved of Mr Miliband than Mr Cameron but, conversely, fewer disapproved of him as well.

Recently however, David Cameron has seen this improve while Ed Miliband has seen a serious drop.

Just to be warned, this is going be fairly chart-heavy. 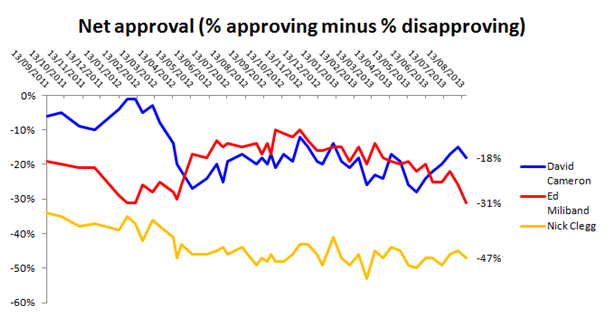 When we ask political questions, respondents usually respond in a partisan manner and support whichever response seems like it?s the one supported by ?their team?. Some choose more independently and then we have the views of people who don?t support any of the ?big three? parties which is what tends to cause the variation we see in the answers. With approval ratings however, there has always been a big gap between the relatively uniform approval that David Cameron receives from Conservative voters and the much less enthusiastic backing that Labour voters give Ed Miliband.

This is over the last 12 months so doesn?t include moments like the EU veto in December 2011 which substantially boosted Cameron?s ratings. The picture is nevertheless clear that Conservatives are fairly united behind David Cameron while Labour voters are much less confident about Ed Miliband.
Aside from the fact that these are ratings among people who say they will vote for each party, and thus to an extent the leader?s performance could already have been ?priced in?, there are two other base factors here:

So taking as a base the fact that Ed Miliband?s ratings are lower than David Cameron?s, what?s behind his recent deterioration?

Let?s look at some more charts.

A general rule with political opinion polls is that we can?t say empirically what has caused a shift but the end of August saw a succession of Labour figures criticising Ed Miliband?s leadership and the direction the party was going. It would make sense that the main impact of these comments would be on Labour voters themselves. As well as this, Labour has been in the news for Miliband?s proposed changes to Labour?s relations with the trade unions, relations which the majority of Labour voters consider to be a positive thing.

Regardless of the merits or demerits of Ed Miliband?s leadership or the changes to the Labour-Trade Unions relationship, a general political rule of thumb is that divided parties lose votes because divisions prevent a party?s entire support base from uniting around it and we?re seeing an example of it now.

The effect of attacks by outside sources such as the Conservatives or media organs considered hostile by Labour supporters will be seen in a drop in Labour?s vote share as those who are likely to be swayed by them fall away but supporters stay put. However, among loyalists who would vote Labour anyway, approval ratings are a pretty good way of measuring the effect of intra-party conflicts and friendly fire.