The debate moved some numbers but not the one that counts

The debate moved some numbers but not the one that counts

The winner of the all-party leaders? debate was the status quo. Even Nicola Sturgeon, the winner in our post-debate poll, already has a commanding lead in Scotland and her debate performance will serve to consolidate that rather than expand it.

That same poll gave Labour and the Conservatives 33% of the vote each. In fact the only event which seemed to shift numbers was George Osborne?s last Budget which, in our polls, moved the Tories from a 2 point deficit to a 3 point lead but not only was that not picked up in other polls but it has now subsided.

So what did the debate change?

The main effect, if any, has been to give each party leader a boost in approval ratings, fuelled by gains among their own supporters. The chart below shows the net approval rating (i.e. the percentage who approve minus the percentage who disapprove) of each of the four UK party leaders among those who plan to vote for that party. The 7-way debate happened just prior to the final data point in the series: 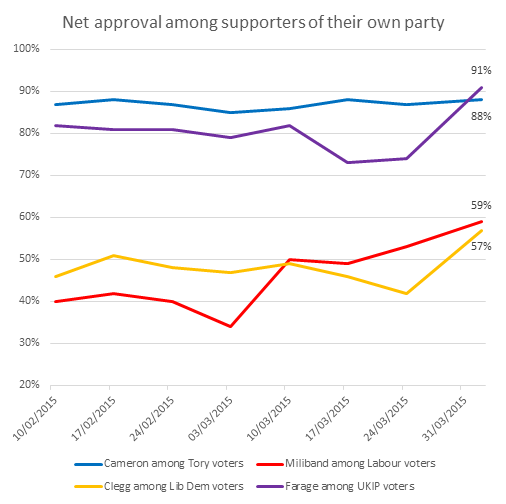 The main beneficiary here is Nigel Farage. The UKIP leader had seen a dip in his net approval ratings among all voters, slipping behind Ed Miliband, but a surge among UKIP voters has brought his overall figures back up. Mr Farage may have had one of the most controversial moments of the night (referring to his comments about treatment for HIV positive immigrants) but his goal wasn?t to win over new supporters but to reinforce the resolve of those already on his side and among those he seems to have scored a hit.

Nick Clegg has also seen a rise in his approval ratings though these remain far below any other leader. Mr Clegg?s best rating in months is still slightly lower than Ed Miliband after a bad week.

David Cameron?s line is flat which makes complete sense. The Prime Minister has long had very strong support among those who would vote for the Conservatives and is in the news everyday so there are likely very few Conservative voters left for him to convert with a good first impression.

This is not the case for Ed Miliband though. The Labour leader has long struggled with the fact that his support among his own voters is much softer than Cameron?s but the chart above shows that this is gradually firming up. Labour?s vote share hardly changes over the same period so here at least we can rule out less supportive voters drifting out of the Labour column leaving Mr Miliband with a larger slice of a smaller pie.

When Labour led by 10 points the question was how this could be reconciled with the fact that Mr Miliband consistently trailed Mr Cameron in personal ratings. Would the Labour leader?s ratings rise to meet his party?s vote share or would Labour?s vote collapse to meet Mr Miliband?s ratings?

What seems likely is some combination of both has been happening. Labour voters who strongly dislike Mr Miliband have drifted away while those that were lukewarm have become more positive as the election approaches. The debates and other television events have likely played a part in this but there aren?t that many of them left and we have already had the only occasion where Mr Miliband and Mr Cameron will be in the same room and able to respond to each other.

Given the overall state of the parties though, it is getting harder to imagine what sort of event, if any, could tip the scales in either side?s favour.