We questioned 2,000 UK adults over an 8 month period and witnessed some big changes in perception.

When the bid was won back in 2005, the Government set out a number of promises that they wanted the London Games to bring to the UK as a whole, down to the residents of the east end of London.

Over a period of 8 months, we tracked which of these promises the public believe the Government would keep, and it is safe to say that the UK public had a healthy level of cynicism with a high proportion believing the Government would achieve ?none of these?. We questioned 2,000 UK adults over the ?Super Saturday? weekend (August), and witnessed some big changes in perception (see fig.1).

The Games pushed hard on the ?inspire a generation of young people?, so much so that four in ten (39%) believe this promise will be kept. This tagline featured heavily on Games advertising and in-event posters, and also in the athletes of the future being given the opportunity to light the Olympic torch. 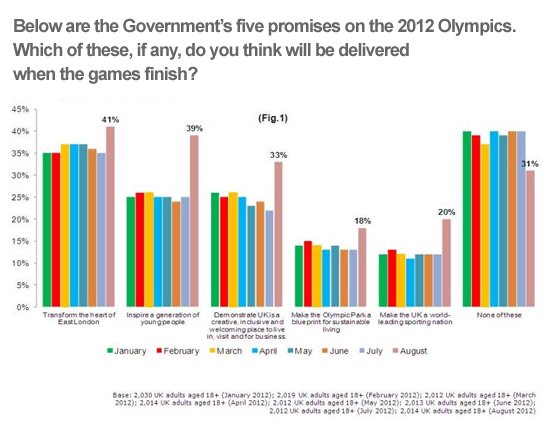 The London Olympic Image is in line with iStockphoto’s terms and conditions in using the image soley for editorial purposes.