Commentators have worried about the slowdown of social mobility for years. Many argue that if you were born poor in 2010, you are far more likely to stay poor than if you had lived decades before.

This view appears to be confirmed by much of the electorate. 47% of likely voters say that they think social mobility is decreasing in the UK, while only half as many (22%) believe that it is increasing.

The party difference probably is not too surprising: a majority of Labour voters (56%) think the ability to move between income groups is decreasing, while Tories are slightly more prepared to think its increasing than dropping (35% to 29%). Perhaps most of interest to Mr Cameron is that UKIP voters are far more pessimistic than Tory voters, with 53% thinking social mobility is decreasing. 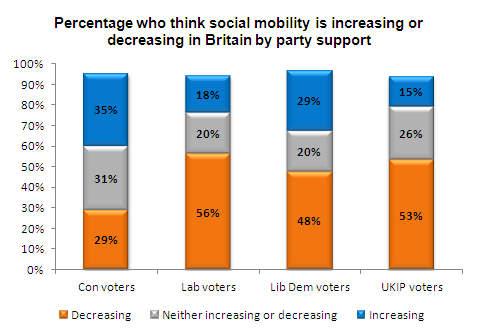 One interesting fact is that the younger generation (18 to 34) ? which one would imagine is most active in the struggle of moving up the social ladder ? are less likely to think social mobility is going down than the older generation (39% to 52%).

Along similar lines though, most voters (51%) also thought that today?s children would be worse off than their parents. Although the party break down was similar, younger voters were just as pessimistic as the older generation.

Opinium Research carried out an online survey of 1,655 likely voters. Results have been weighted to nationally representative criteria. The research was conducted from 12th October to 14th November 2013.