2013 has been a year of highs and lows for Britain?s political parties.

UKIP saw its polling figures rocket up in May, hitting a high of 21% after success in the local elections, before falling back to the mid-to-high teens. 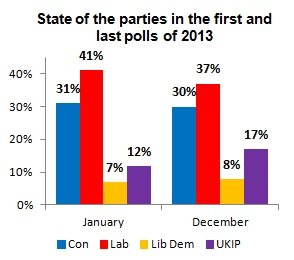 Labour and the Tories have both seen troughs and then recoveries. Labour had its highest lead of 13% over the Tories since the election back in January 2013, which ebbed away to an 18-month low of 5% in September and October. The Tories also received their lowest polling figures of this parliament with a poor 26% straight after the local elections, only to make a slight recovery over the summer and autumn.

Ed Miliband?s leadership has still been under the microscope this year, despite the fact that the Tories haven?t lead in the polls since 2012. In April, fewer than one in three (31%) said they could imagine him being Prime Minister, while 62% said they couldn?t. This was even worse in September. Worst of all, it was his own supporters who were losing their nerve. In April, 71% of Labour voters could imagine Miliband being PM, dropping 8 points to 63% in the autumn.

Similar confidence in a Labour victory has declined. Back in March a majority (54%) believed Labour would win rather than the Tories in 2015. In October, however, the assumption that Labour was headed to victory had ended; the public is now far more evenly divided (41% and 37% believe there will be a Labour or Conservative victory respectively).

Of course we cannot fail to mention the role that Europe has played in politics in 2013. In truth, the polling here has been relatively stable ? throughout the year three in ten thought the UK?s membership of the EU was a good thing, while over four in ten thought it was a bad thing. There has also been a majority in favour of leaving the EU throughout our polling this year, although the ?out? lead has narrowed slightly.

Another big story of the year has been the improving economy, although the public is still responding cautiously. More than half (52%) still think the economy is in a bad state, even if that is down from the 71% back in February. This has a had a limited effect on economic trust, as Osborne & Cameron increased their lead over Balls & Miliband slightly to 11% by December.

In October we found that there is broadly quite a lot of confidence in the BBC, but this did not preclude complaints such as that the license fee was too high (77%) and that the BBC should compete with private companies for funding (57%). Despite belief in its accuracy (60%), the BBC may suffer from a slight underlying bias, as most Tories thought the Beeb had a left-wing bias, while most Labour voters thought it was neutral.

While most support free schools and think they?re a good thing (44%), it does not change the fact that most (60%) are concerned that free schools are allowed to employ teachers without a PGCE. However, most seem to support Mr Gove?s flagship policy playing a part in the education system for the foreseeable future, although only 23% support the Government?s policy exactly as it stands.

Polling on party funding back in July shows that although Labour?s backers may have been in the spotlight, the public had a negative view of both party?s funding arrangements and believe that their main financers had too much influence. Regarding the changes Ed Miliband has promised to make to the Labour Party?s funding rules, most support the proposals (including 47% of Labour voters) but less than a third (29%) think he is likely to see them through.

All in all, this year’s polling is probably best seen as getting us ready for the last 18-months of this parliament. With UKIP still holding up, and the Labour lead narrowing, it looks like we’re in for an even more fascinating year for political polling in the UK!