Voters are lukewarm about ideologies

This week’s Politicalbetting.com poll looked at what voters think of a number of different political ideologies with none receiving overwhelming approval.

Participants were asked to give their view about a number of commonly discussed political ideologies but the only thing that appears to unite the population is their disdain for fascism, anarchism and communism. 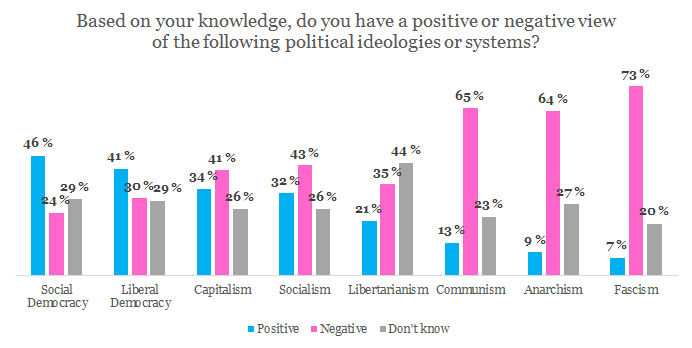 Given that the UK operates under what could be described as a mix of capitalism, social democracy and liberal democracy, it is hardly an endorsement of the present status quo.

However, another factor is that† many of these terms are poorly understood and no definition was provided with the questions. What this question therefore tells us is perhaps more about how popular communism or fascism are as brands rather than the underlying tenets of their ideologies.

Some partisan splits are expected, others less so

Conservative voters are more likely to have a positive than negative view of capitalism, but this is by a narrower margin than expected: only 52% vs. 29% having a negative view.

Conservatives are more united in disliking socialism (68% negative vs. 16% positive) while Labour voters view it more positively (54% vs. 23% viewing it negatively).

Finally, 6% of Liberal Democrat voters have a positive view of fascism, proving that any poll contains about 5% of people who answer in a way that invites confusion.