Labour and Conservatives†are neck and neck in the polls

The Conservative Party conference has not had an impact on poll performance.†Opinium?s Weekly Conference Tracker shows support for Labour rose by 3 points over the past week, while the Conservatives see no change in their polling figures.†

However,† Theresa May does get a slight boost in approval; her net approval rating marginally increased from -14% last week to -12% this week.†This is the first time since June that Theresa May?s approval ratings are the best of the three main party leaders.† 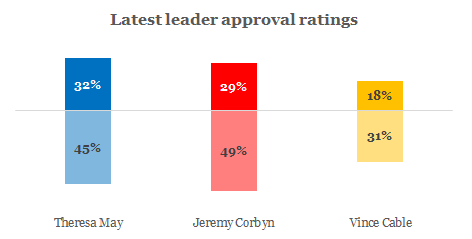 And overall, the public think May performed better than Corbyn during the Conference season (25% vs 20%).

Boris Johnson as future leader of the Conservative Party?

Despite many questions over Theresa May?s position, Boris Johnson does not appear to be the answer.The public think Theresa May is the best person to lead the Conservative Party rather than Boris Johnson (32% vs 17%) and this is even more so the case among Conservative voters (62% think May is compared to 15% thinking Boris is).