Conservatives†take a 3-point lead in the polls

The Conservatives have gained a 3-point lead over Labour despite a strong showing by Jeremy Corbyn?s party at their conference this week.

The decrease in votes for Labour is primarily a result of losing favour amongst Remainers in the last week ? with support falling from 53% last week to 50% this week.

However, Jeremy Corbyn?s rousing performance in Liverpool served some personal success, and his net approval rating marginally increased from -21% last week to -18% this week. 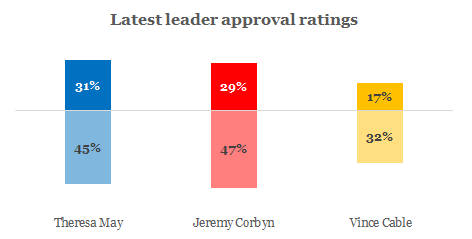 Despite Corbyn stating this week that Labour are ready for government, this is not what most of the public think. Labor’s ratings are either the same or a little it worse than this time last year.†

A public vote on the Brexit deal

If a public vote was held after a Brexit deal was agreed, 39% of the public think that the options on the ballot paper should be between leaving on the terms of the exit deal vs. leaving the EU without a deal, rising to 63% of Conservative voters.