Tory leads slips slightly to 17 points as both major parties consolidate their vote.

Theresa May?s poll lead has dropped back slightly to 17 points over Labour, as the two major†parties take votes from the smaller parties.

This is the first poll where we have included a past vote weight in addition to our party propensity and EU†referendum vote weights. For the most part†our party propensity weighting†helps to ensure the number of voters for each party in 2015 is accurately reflected in our sample. However, we have noticed some varied responses†to our 2015 past vote question during the past couple of months, even after taking account of†party propensity, so we have included this in our weighting targets to ensure this remains stable over the course of the campaign.

After her strong figures last week, Theresa May?s approval ratings have dropped slightly to net +17% this week. Currently almost half (48%) approve of the way she is handling her job and 31% disapprove. 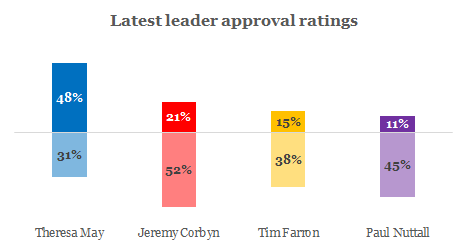