The Conservatives? lead continues to narrow as the Brexit crisis continues, dropping for 4-points to 1-point in a week.

Most of the Tories? vote loss appears to be amongst Remainers, where they are down 3 points from last week, while remaining stable amongst Leavers.

On the other hand, UKIP are now on 17% amongst Leavers, the highest since the general election. This also puts them within touching distance of Labour (on only 19%), who are now in danger of becoming the third party amongst Leave voters. 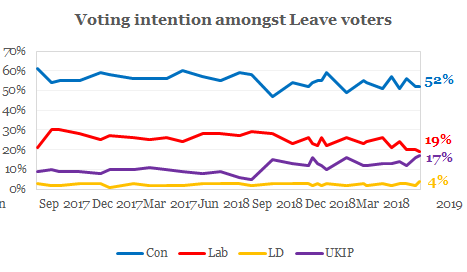 Perception of Theresa May?s handling of Brexit has taken a big knock. This week she has a net approval on Brexit of -40% (21% approve vs 61% disapprove), a whole 10 point down from last week.

However, this still doesn?t translate into more support for Jeremy Corbyn?s response: his net approval on Brexit is -49% (16% approve vs 65% disapprove).