Tories lead rises after snap election called as UKIP vote falls away to the Conservatives.

The Conservative lead has increased†to 19 points in†our latest voting intention poll in the 48 hours after the election was announced. The Conservatives are on 45% (up 7 points from last week), while Labour is on 26% (down 3 points).

In a separate study, we have been following the same 2,000 voters all through this parliament. We asked how they intended to vote in February 2017 and immediately after the general election was called.

The crumbling of the UKIP vote in favour of the Tories is the main reason for their (almost) overnight improved performance in the polls.

Theresa May?s approval ratings stay at their near high of +21%. Currently almost half (49%) approve of the way she is handling her job and 28% disapprove. 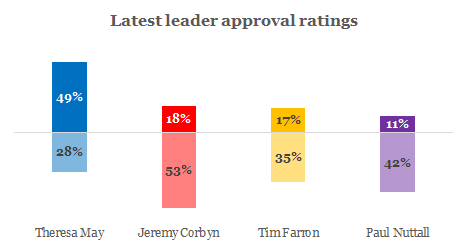 Seven†weeks off from the election, this leaves Theresa May with far higher approval ratings than Jeremy Corbyn.† 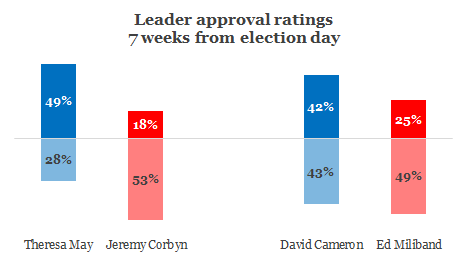 The gap between the two is also noticeably wider than the gap we recorded between David Cameron and Ed Miliband at the same point in 2015 (42% approved of Mr Cameron vs 25% approving of Mr Milliband).