The Conservatives regain some ground to reduce Labour?s lead from 3-points to one.

The Conservatives have increased 2 points since last month, mainly at UKIP?s expense, with Labour holding steady on 39%. 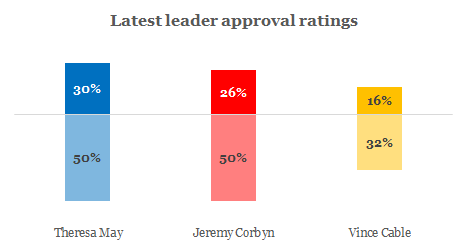 Theresa May?s lead over Jeremy Corbyn on who would make the best prime minister has remained relatively steady at 8 points (30% for May vs 22% for Jeremy Corbyn).

Theresa May still seen as better than Jeremy Corbyn

The plus side for Theresa May is that Jeremy Corbyn?s response on Brexit has been rated even worse by UK adults, and this is dropping. This month only 16% approve vs 55% disapprove (last month 19% approved vs 50% disapproved).

Prime Minister seen as more brave and decisive than before

Almost half (47%) of voters now see Theresa May has brave, up from 43% in October. Similarly, 41% now see the prime minister as decisive, the highest since the election last year.

47% now also see Theresa May as someone that sticks to their principles, the highest figure recorded for her, even from before the general election.