After the ups and downs of conference season it appears that Conservatives have managed to draw a line under Chequers, taking their largest lead over Labour since May this year. The Conservatives managed to increase their vote share by 2points, while Labour dropped back by 2 points.

However, a change in leader approval doesn’t appear to have factored into this. Theresa May’s net approval is still relatively similar to Jeremy Corbyn’s.† 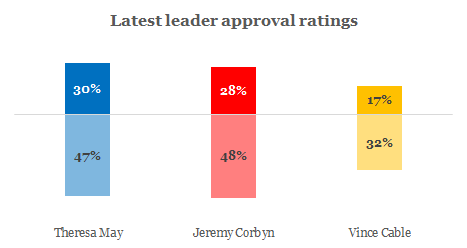 Overall, 33% think Theresa May would make the best prime minister, compared to 24% for Jeremy Corbyn, which has been relatively stable since the start of September.

Public are split on the most likely outcome in March 2019