The Conservatives lose their lead, dropping two points to 40%. This puts them level with Labour, who stay on 40%.

Jeremy Corbyn has seen his net approval rating decline noticeably from -10% last month to -19% this month. However, Theresa May?s net rating has remained relatively stable, very slightly improving from -9% to -8% this month. 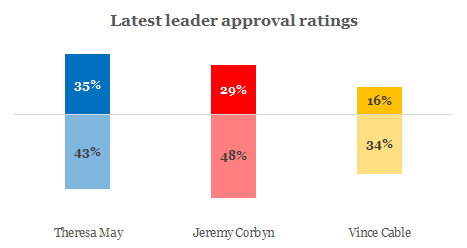 Theresa May?s lead over Jeremy Corbyn on who would make the best prime minister has risen from 8 points to 12 points (currently it stands at 36% for May vs 24% for Jeremy Corbyn).

Half (50%) approve of the way Theresa May has responded to the Salisbury attack, up from 41% last month.