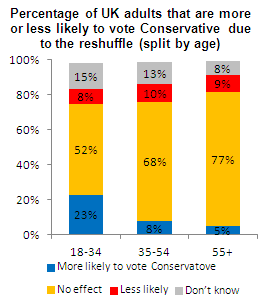 When we asked UK adults what effect the reshuffle had on their vote, 11% said it had made them more likely to vote Conservative, while 9% said less likely. However, for two thirds (66%) it had no effect, either because it would not change their voting intention, or they were not going to vote.

Younger Britons seemed to be the most receptive, with a quarter (23%) of 18-34 year olds saying the reshuffle had made them more likely to vote Conservative.

When we looked deeper into the public’s view of the promotion of several women in the reshuffle, over half (57%) thought Cameron did it in an attempt to shed the male-dominated image of the Conservative Party, while 28% agreed that the Prime Minister did it to improve the gender balance of his government.

Only on in six (15%) thought Cameron promoted the women based on their individual merits regardless of gender.

However, regardless of what Brits thought of his motives, 53% said that it is important for the Cabinet to ?look? like the people it governs, for example, by being proportionally representative of the UK by gender and race.

Interestingly there is little difference between genders on this measure. However, older voters were twice as likely to think it was not important than the younger generation (43% to 22%).

Who are the new Tory team?

We also wanted to see how well these new names in the Cabinet were known to the public at large. The most well known of the new appointees was Esther McVey – who previously worked in TV – as 40% said they had heard of her. By comparison, only a fifth had heard of Education Secretary Nicky Morgan (22%) or Environment Secretary Liz Truss (21%). Only 10% had heard of the new Welsh Secretary Stephen Crabb.

Unsurprisingly, they were all well behind the big names in the government: 90% said they had heard of David Cameron, and more than four fifths had heard of William Hague (86%), George Osborne (86%) and Theresa May (82%).