Rent cap response might not be what you think

Rent cap response might not be what you think

Although the rent cap policy did become a major talking point of the campaign on the day it was released, it didn’t get as many mentions as the Tory Right to Buy policy a couple of weeks earlier.

When we looked at how the policy was received in different parts of Great Britain, the net sentiment reaction was noticeably more positive in Scotland, while it was slightly more negative in the Midlands.

Most of the numbers were still quite similar, and smaller sample sizes and how tweets are issued with a sentiment rating should be treated with some caution. However, the interest in this is that areas of the UK most likely to benefit from a rent cap, such as London, did not give a noticeably more positive response to the policy than the national average. 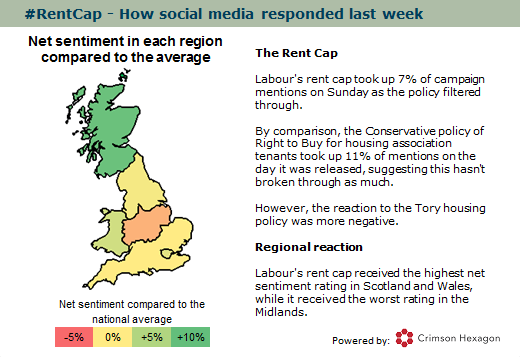