And it appears that the top choice from the British public was a wonderfully uncontroversial pride in the UK?s beautiful landscape and architecture (36%).

Not too surprisingly Britons are also proud of their history, with three in ten (30%) saying it made them proud to be British. This was something shared across gender and age groups and most of England. However, Scotland had a far lower pride in overall British history at only 18%, which is perhaps down to the history between England and Scotland.

Our research also confirms the place the NHS has in our national life, with the 65-year-old institution now also being seen by almost three in ten (28%) as what makes them proud to live in the UK. This was apparent throughout income groups, with ABC1s (28%) and C2DEs (27%) both ranking it highly. 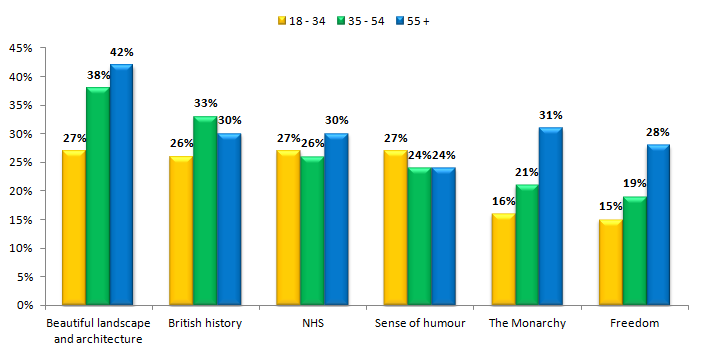 However, there were also clear signs of age differences that showed quite diverse conceptions of what is best about Britain. Under 35s, compared to the over 54s, are far less likely to feel patriotic about the Monarchy (16% to 31%), freedom (15% to 28%) and democracy (9% to 22%). On the other hand, they are far more likely to be proud of multiculturalism (12% to 3%) and British achievements in sport (9% to 5%).

Note: Respondents were asked to select up to three answers from a predefined list. That list was compiled using answers from an earlier survey in which a nationally representative sample were presented with an open text box and asked, unprompted, to say what, if anything, made them proud to be British / live in the United Kingdom

Opinium Research carried out an online survey of 2,004 UK adults. Results have been weighted to nationally representative criteria. The research was conducted from 4th to 7th October 2013.